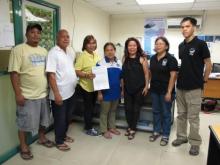 Two computer units were donated by CCEF for use at Barangay Banilad Hall and Banilad Elementary School last May 23. The official turnover was done between Moonyeen Alava, executive director of CCEF and Inday Ouano, a councilor of Barangay Banilad.
One donated unit was placed at the Gender and Development (GAD) desk of the barangay, to be used for official clerical tasks. The other unit was given to the office of the principal of Banilad Elementary School for its official use.

The Disaster Risk Reduction Management Office held its 1st “CSO-Barangay Interface: A Platform for a Resilient Cebu” last May 4 & 5, 2017 at Harold’s Hotel, Gorordo Avenue, Cebu City. It aimed to achieve a: 1.) Leveled off understanding on DRMM-CCA and the responsibilities of stakeholders especially local governments; 2.) Map out existing resources, expertise and replicable community practices in resiliency-building; and 3.) Identify strategies and a platform for convergence of initiatives in DRMM.

The Central Visayas Network of NGOs held its 11th General Assembly at the Gansewinkel Hall , University of San Carlos, Cebu City last April 27 to 29. With the theme “Valuing Civil Society Organization Engagement with Government”, the thrust of the event was to create a dialogue and discussion among Civil Service Organizations (CSOs) within the region and consult representatives on the status and future of Philippine Democracy.