Santander as one of the municipalities in the province of Cebu in the region VII area within the Central Visayas islands known on its way to a development that is balanced and nondestructive to its environment with an economy based on sustainable fishing, farming, trading and tourism. Lloyd G. Yosoya, The Youth Camp SEAklab Project Manager and Alyza T. Tan, The Youth Camp SEAklab Project Coordinator led the Environmental Scanning including the 6 coastal barangays of Santander last February 4-6, 2019.

The regional rollout training on barangay advocacy on the prevention of corruption was launched last December 11-12, 2018 at Hotel Elizabeth, Kamputhaw, Cebu City.

The Power of three: Mangroves, seagrass and coral reefs 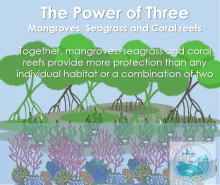 Although Mangroves, seagrass and coral reefs are all productive and important ecosystems, they also represent the most threatened ecosystems globally. In the Philippines, these ecosystems are often conserved as individual habitats, but we must take note that together these three provide more services than an individual or any two of them combined. In addition, these three are not isolated systems, and they actually help and protect each other from disturbance such as pollution and climate change.

Sharks are important key players in structuring food webs, whether they are at the top of the food chain or at lower trophic levels, yet they are considered one of the most threatened taxa globally. In the recent years, there has been a growing movement for shark conservation in the country ever since the 1st Shark Summit in 2014.

In recognition of its event, “Pasasalamat sa Katauhan” which was hosted by Atty. Antonio Oposa, accomplished Marine Scientists, lawyers, policemen as well as representative members of the local LGUs were awarded with certificates of recognition from the United Nations Environment Programme in appreciation of their exemplary work on protecting and monitoring Tañon seascape. 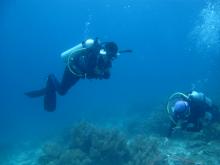 Just recently, CCEF has just finished its preliminary assessment in southern Cebu as part of the Coral Reef Rehabilitation Project: Assessment and Capacity Building through Protocol Training in Southeast Cebu and Siquijor Province (ADABOSS Project). ADABOSS stands for the seven municipalities to be assessed by the project Argao, Dalaguette, Alcoy, Boljoon, Oslob, Santander and Samboan 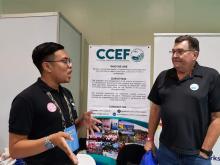 Siquijor Province Coastal Resource Management Alliance (SPCRMA) Memorandum of Agreement was officially signed on August 13, 2018. After more than a year of consultative meetings and lobbying for the cooperation of each participating Municipality, the Siquijor Province has finally formalized the agreement of mayors of 5 out 6 municipalities, namely, Enrique Villanueva, Maria, Larena, Lazi, and San Juan. 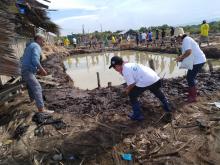